The primary active ingredient in marijuana that produces the psychoactive (the old “weed”….), or mind-altering, effect (aka the “high,”), as well as many other therapeutic properties associated with the plant, is the chemical compound tetrahydrocannabinol or THC for short.

However, THC doesn’t only exist in one form.

The most commonly-known form of THC, by far, is delta-9 THC, but another of the four most common chemical compounds in marijuana is Delta-8 THC.

Like delta-9 THC, delta-8 THC also produces a high, but it possesses many distinct differences too.

What makes it legal? (UPDATE: legality is changing, plus more people prefer Delta 9 THC which is becoming more and more legal)

Delta-8 and delta-9 are both cannabinoids (such as CBD, CBN, CBDA, and CBG).

As the law allows, this cannabinoid, just like permitted CBD and alike, has a content much lower than the federally allowed amount of 0.3%. 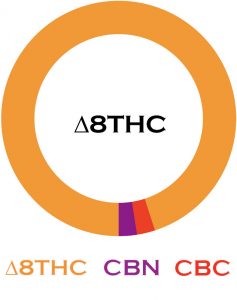 How does Delta 9 THC help?

Many other cannabinoids exist in the cannabis plant as well, though THC, in all its forms, is the group of cannabinoids attributed to the psychoactive properties cannabis possesses.

By taking cannabinoids like delta-8 and delta-9 THC into your system, you can help to correct irregularities in these regulatory functions and compensate for an inadequate supply of natural endocannabinoids when your body and/or brain need them to achieve certain objectives (like relaxation, appetite, or pain-relief.)

While delta-8 and delta-9 THC are both forms of tetrahydrocannabinol that provide many of the same benefits, they each provide them in different manners and degrees. 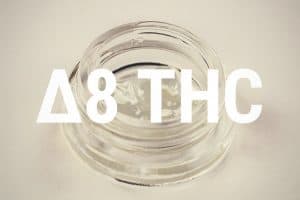 Pure Delta 8 THC is perfectly clear, if you see any that are not, stay away. Thick and translucent.

Not only is the high that delta-8 THC produces less intense than that of delta-9 THC, but, according to user reports, it is also less cerebral, providing a more lucid, clearheaded, and engaging bio-availability experience without foggy-headedness or anxiety while still offering relaxation and a pervasive body euphoria.

Also D8 less sedating, allowing you to achieve the desired relaxation results without experiencing sleepiness or fatigue as a side effect. Whereas delta-9 most of the time will eventually enter into “fatigue mode”.

Generally speaking, one way many users think of delta-8 THC in terms of its effects and benefits (albeit not its molecular makeup) is as somewhere between CBD and delta-9 THC.

It is non-habit forming and best when vaporized, as the bio-availability is around 80% (in other words your body will get more, as there are fewer barriers to enter the bloodstream).

Both delta-9 and delta-8 THC possess many similar therapeutic properties, though within these similarities may be differences in intensity of effects and degrees of effectiveness. 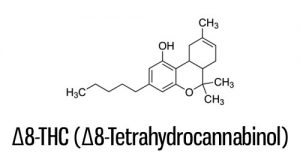 This is the Delta 8 THC Molecular breakdown, very similar to that of cannabidiol (CBD).

Specifically, both forms of THC have a double bond in their respective structure. However, in delta-8 THC, that double bond is in the eighth position, whereas, in delta-9 THC, it’s in the ninth position. 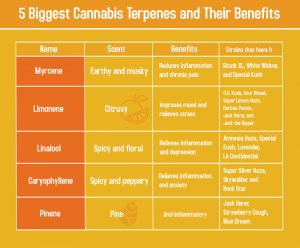 Terpenes are what naturally adds flavor, every strain has its own terpene “profile”. The above are most abundant, but there are many more.

Differences between strains or names?

Terpenes and different levels of cannabinoids.

Much is made of this, and for good reason. Though you will probably not notice too much of a difference. Terpenes add the flavor profile, and sometimes they can play a role in the overall feeling.

Terpenes are everywhere, not just in hemp and marijuana. What gives that orange its flavor profile? Terpenes! Some terpenes are proven to have a different variational effect over another one.

A formidable opponent, but nowhere near as effective as THC, Delta 8 is also quickly becoming a topic of conversation among lawmakers, it is already banned in 6 states with more on the way, why? Because it does affect you, and more of the brands are turning out to be falsely labeling and making false claims. The down and dirty is that Delta 9 THC kicks the hell out of Delta 8, it is also being sold at some outrageous prices due to having the name “THC” in it, but falls way short of the benefits of the “real thing”. Having tried both, “D8” as its called on the street, doesn’t come close to D9 THC (weed) and at the prices gauging and no future market for it, seems we have or might have, a failed marketing campaign over something that gives you the same effect as holding your breath for 20 seconds.

Don’t bank on it, we do not discourage you to try it, but there is just, sadly, no comparison. And health-wise, it is turning out not to do anywhere near the things said about it. That was a large part of the marketing, a legal weed, but in the case, not so fast and not close at all.

END_OF_DOCUMENT_TOKEN_TO_BE_REPLACED

The Importance Of CBD Face Masks And Why Use One

END_OF_DOCUMENT_TOKEN_TO_BE_REPLACED

How your health can benefit from a CBD Tincture!

END_OF_DOCUMENT_TOKEN_TO_BE_REPLACED

close
Scroll To Top
Enjoy the best browsing experience on our website, you agree to our use of cookies.
Close

You must be 18 years of age or older to view the page.